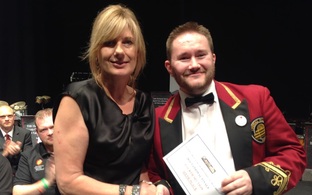 Ben Ward, (Principal Cornet) is pictured left with the Certificate 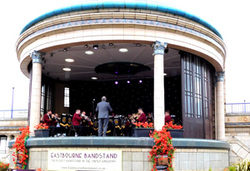 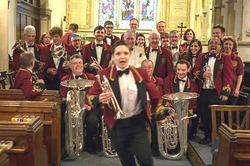 Tenterden - June 12th
The band, pictured  left at the  Parish Church of St Michael and All Angels, celebrating the 90th birthday of Graeme Cornish's father.
Graeme is a front row Cornet and concert soloist.
Photo courtesy of Mia Hawk, pictured prominently at the front of the shot as she dashed forward before the camera delayed action.

Pictures
Broadstairs - 9th May
Message from a member of the audience
Dear Ms Bleach,
Today, I listened to the band playing at Broadstairs. I thought they were superb.
I attend most of the band concerts at Broadstairs Bandstand during the summer and Crystal Palace Band must be the best.
And, It was good to see a lady percussionist, as well as the one with the personality. Also such good soloists. Thank you very much all members of this band, Sincerely,, Name and Address Supplied
The Contest Season
2016 Butlins Mineworkers Championships  - 16th January 2016
4th Section - 3rd from 11 Bands.
Test Piece: 'The Seafarers' - Bruce Fraser
Adjudicators: Kevin Holdgate and Mike Kilroy
Click for Results Table
2016 - ODBBA Band Contest at Marlborough School, Woodstock, 28th February
The Journal of Phileas Fogg' by Peter Graham
4th Section - placed 3rd from 6 bands
Adjudicator Paul Norley