Interim Musical Director (from April 2022) - Danny Wakefield
Following Mike Gray's decision earlier this year to step down as our MD after 35 years sterling service to the band, we are grateful to currently have the services of Danny Wakefield as our Interim MD as we transition towards a new permanent conductor being appointed for the Main Band.
Danny has been involved as a player in the band since 2011 and brings with him past experience of conducting Fakenham Town Band from Norfolk. 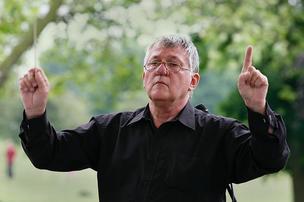 When Michael was appointed Musical Director of CPB in 1987, he brought to the band his wealth of musical experience primarily obtained during well over 20 years in the Scots Guards, which included playing the oboe and cello, and arranging for many different combinations of groups.

Whilst undertaking training as an Army musician at Kneller Hall, he won the Cassell Prize awarded by The Worshipful Company of Musicians of the City of London. Over the years he has also been commissioned to arrange music for the Edinburgh Tattoo, the 70's pop group "Mott The Hoople" and he has played in several West End theatre shows.

As can be seen from current programmes, the band continues to reap the benefits of his continued enthusiasm for music arranging and musical direction.