Happy to be... a Conductor 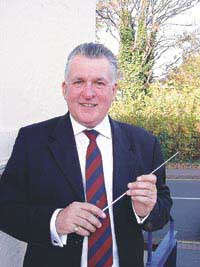 By Daniel Menhinnitt. Article Courtesy of the Croydon Guardian - 24/11/2004

It's the job of a conductor to get the best from a band, says Thornton Heath's Mike Gray. But despite his experience in the Scots Guards' military band the 58-year-old believes the best way to do that isn't by giving orders.

Mike says it's essential to be able to work with people of all ages. After all, the brass troop he conducts, Crystal Palace Band, has members ranging from 15 to 60.He says: "The difference between a military band and Crystal Palace Band is all the difference in the world. I don't act like an autocrat. I think the most important skill is being able to deal with group dynamics."

Mike who has been conducting the band since he left the Scots Guards in 1987 says: "You've got to remember that for the band members this is their hobby."
While the Crystal Palace Band is a hobby for its members Mike's time in the Scots Guards was a professional affair. The military band provides music for the Trooping of the Colour in celebration of the Queen's official birthday in June. The Scots Guards Band was also deployed on active service in 1992 during the first Gulf War.

The computer systems administrator for Broadmead Junior School says: "The other part of my role is interpreting the music. "Making sure it's beautiful and making sure the rest of the band can play that interpretation."

Multi-instrumentalist Mike says he gets most pleasure from the cello although he also plays the flute and the piano.

Crystal Palace Band is one of the oldest in London, having celebrated its centenary in 2001. It was formed in 1901 as part of the Temperance Movement a series of Victorian religious and political pressure groups advocating teetotalism.But most people will be more familiar with brass music following the success of the 1996 movie Brassed Off. "One of the most important skills for a conductor is concentration," says Mike. "And it's like anything in showbusiness, you've got to be aware of the audience. You've got to be able to get the music right to the back of the room."

And Mike must be doing something right. "At our last charity gala concert I had people from the audience asking if we had any recordings they could buy. So that goes to show they must have enjoyed it."

This year (2004) the band will hold its charity concert at St Bartholomew's Church in Sydenham from 7-9pm on Saturday, December 4. The music will include classic compilations as well as festive favourites and a raffle.
Last year the concert raised almost £1,700 for the band's chosen charity and was completely sold out.

Mike says: "Last year's concert was an amazing success people were sitting in the aisles. This year promises to be just as good and we hope that as many people as possible will join us in raising much-needed funds for St Christopher's Hospice." Tickets cost £5 and £3. For more information go to www.crystalpalaceband.co.uk or to order tickets for the charity gala concert call band secretary Rachel Bleach on 020 8776 2520.