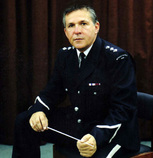 Born in Hastings in 1946 Mike began studying the cello at the age of eleven. After two years of study with Maurice Westerby and Stanley Mant he auditioned for and joined the Band of HM Scots Guards in 1963, playing cello and oboe. In 1965 on completion of a year's course as a pupil at the Royal Military School of Music, Kneller Hall, he won the Cassell Prize, awarded by the Worshipful Company of Musicians.

Alongside his duties with the Guards, Mike's musical activities included arranging and conducting music for wind band and popular music records, including contributions to an album by the now historic group, Mott the Hoople, He also played frequently in the orchestras of the Theatre Royal, Drury Lane and the London Palladium. He was a founder member and the principal cello of the Hertfordshire Chamber Orchestra for four years, working with Andrew Davis and Roger Norrington.

Much of Mike's time in the Scots Guards was spent preparing music for recordings and major military musical events such as Trooping the Colour and the Wembley Pageant. It was during this period that he first worked under the then current Met's Director of Music, Lt Colonel Beat. Along with Duncan Beat, he composed fanfares for the television production "In this, your Honour", a programme in celebration of the 80th year of HM Elizabeth the Queen Mother. In 1977, Her Majesty the Queen's Silver Jubilee year. Mike was commissioned to write the music for the opening tableau of the Edinburgh Tattoo.

On retiring from the army in December 1986 with the rank of Warrant Officer, Mike spent 8 years as the Events Manager at the Royal Academy of Music. During this period he helped to stage important music festivals at the Academy which hosted contemporary composers such as Olivier Messiaen, Luciano Berio and Hans Werner Henze.

Mike Gray was appointed to the post of Deputy Conductor of the Metropolitan Police Band in early June 1995.

In July 1986 he was appointed musical director of the Crystal Palace Band, an association which has been highly successful, taking Crystal Palace twice to the finals in their section of the National Brass Band Championships and winning many regional contests.